Skip to content
Burning of Magnesium Ribbon in Air

Magnesium is a chemical element with the symbol Mg and atomic number 12. The metal is highly flammable and reactive in nature.

Some interesting facts about Magnesium:

When the magnesium is burnt, it reacts with oxygen present in the air to form a compound, magnesium oxide. The reaction produces a bright white dazzling light while converting magnesium into magnesium oxide powder. This oxidation or combustion of magnesium has been used a source of intense light in photography and in other photochemical reactions. Following are the steps to perform the experiment:
Precautions: Wear safety glasses and hand gloves before performing the experiment.

1. Rubbing of Magnesium Ribbon with Sand Paper: Magnesium due to its reactive nature gets coated with rust and carbon in air. The coating needs to be removed before burning. Sand paper is used for the purpose and ribbon is rubbed as shown in the image. 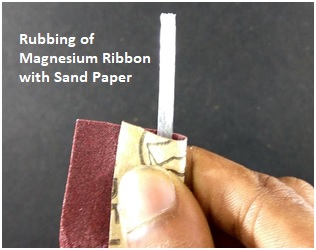 2. Burning of Magnesium Ribbon: Use to the tongs to hold the ribbon and spirit lamp to burn the metal. Hold the Mg ribbon on fire for some time till it catches fire. 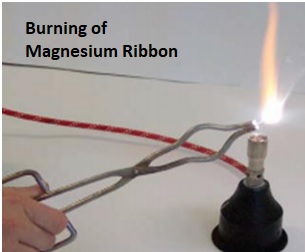 3. Observe the white light: When Magnesium ribbon starts burning; a bright white dazzling light is produced. Use safety glasses to watch the flame. 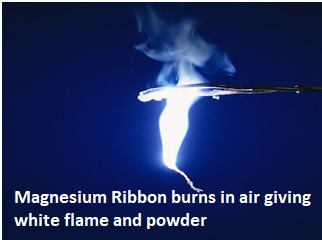 4. Formation of Magnesium Oxide: After the magnesium ribbon has burnt, a white substance is formed in powdered form, called magnesium oxide. The reaction follows: 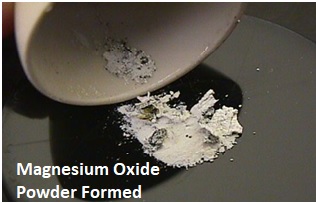 5. Formation of Magnesium Hydroxide: Collect the powdered magnesium oxide in watch glass. Add some water to it. A new compound magnesium hydroxide will be formed as shown in reaction: 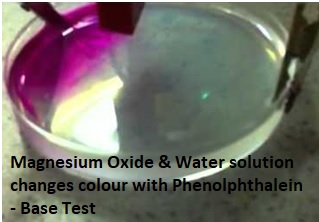