A decomposition reaction is a type of chemical reaction in which a single compound breaks down into two or more elements or new compounds. These reactions often involve an energy source such as heat, light, or electricity that breaks apart the bonds of compounds.

The key component used here is Hydrogen Peroxide which is acidic in nature with 4.7 pH of 30% solution. It is used as an oxidizer, bleaching agent and antiseptic. Hydrogen Peroxide is an unstable compound and slowly decomposes in the presence of light. The first step is to put on your safety glasses. Since 36% hydrogen peroxide will burn if it comes in contact with your skin, it’s best to wear rubber gloves to protect your hands. 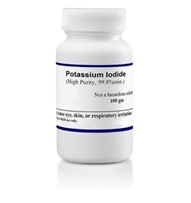 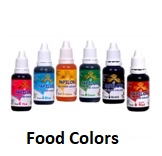 1. Cover the table with the plastic tarp to make cleanup easy at the end of the demonstration.

2. Fill the beaker with approximately 40 mL of water.

3.  Add potassium iodide to the water and stir with a spoon until all of the crystals have dissolved. When this happens, you have what is called a saturated solution. Label the beaker “Potassium Iodide Catalyst” and set it aside to use later. 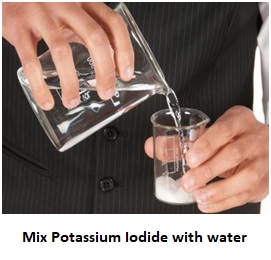 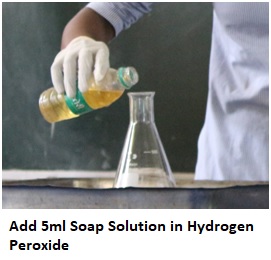 5. Add your favorite food coloring to spice things up. Give the solution a quick swirl to mix the contents. 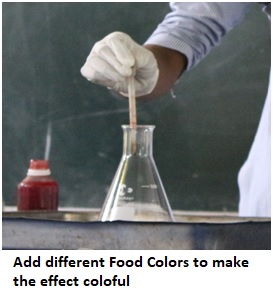 6. The last step is to pour Potassium Iodide catalyst into the graduated cylinder and quickly stand back. Within seconds, the reaction will occur and a mountain of foam will cover the table. 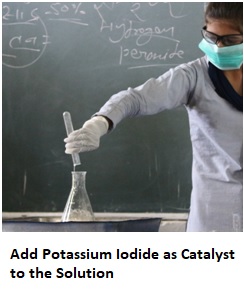 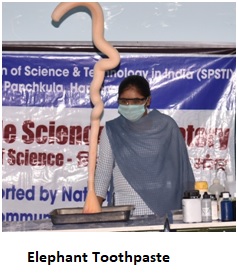 This experiment is sometimes called “Elephant’s Toothpaste” because it looks like toothpaste coming out of a tube, but don’t get the foam in your mouth.

When hydrogen peroxide (H2O2) decomposes, it breaks down to form water (H2O) and oxygen (O2). The soap bubbles that erupt from the cylinder are actually filled with oxygen. You’ll notice that the foam has a brown tint. This color is due to the presence of free iodine produced by the extreme oxidizing power of the 36% hydrogen peroxide. As the reaction takes place, you’ll also see steam rising from the erupting foam. This shows that the reaction is exothermic, meaning that it gives off heat.

Hydrogen peroxide (36% strength) will act as an oxidizing agent with practically any substance. This substance is severely corrosive to the skin, eyes, and respiratory tract. Potassium iodide is slightly toxic by ingestion. Given these safety precautions, it’s best to leave this one to the experts. Just befriend a chemistry teacher and ask him to perform the famous Exploding Toothpaste experiment.