Skip to content
Interesting Experiment-Extinguish and Ignition of Flame

The fact used here is that a flame requires oxygen to burn and carbon dioxide to extinguish. Most of the flames require three basic components viz. fuel, oxygen and specific amount of heat. These three components are also referred to as the combustion triangle. 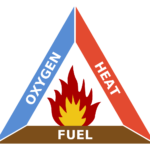 Let’s start the experiment first and then discuss the explanation.

Chemicals or Apparatus Required for the Experiment 2. Now add 10 ml of vinegar in baking soda in first flask and yeast or Potassium Iodide (KI) in Hydrogen Peroxide in second flask.

3. Initially, burn the stick with the help of a lighter. Put the burning stick towards the beaker 1 containing solution of baking soda and vinegar. The match stick gets extinguished immediately. This shows the presence of carbon dioxide. The reaction explains the chemistry behind the concept.

4. As soon as the stick gets extinguished, put it towards the beaker 2 containing the solution of hydrogen peroxide and potassium iodide or yeast. The stick catches fire immediately and starts burning again. This shows the presence of oxygen in beaker 2. The reaction explains the chemistry behind this concept.

During the initial lighting of the stick, all three components of the combustion triangle; fuel (stick), oxygen and heat (from lighter) are present. As you put the burning stick towards the first beaker, the fire gets extinguished. It means one of the three components are missing there. Which one..?

The vinegar, or acetic acid, is a weak acid. When baking soda ( a base) and vinegar are combined, the immediate acid-base reaction creates carbonic acid. Carbonic acid is unstable and decomposes into carbon dioxide (CO2) and water (H2O). The bubbling that you see inside of the cylinder is the production of the CO2 gas. When you dip the popsicle stick into the cylinder, you’re exposing the flame to concentrated CO2 gas. The lack of oxygen extinguishes the flame.

Immediately after this, when you put the extinguished stick towards the beaker 2, it catches fire. As Hydrogen peroxide (H2O2) is fairly unstable and always trying to decompose into water (H2O) and oxygen (O2). When potassium iodide or yeast is mixed with hydrogen peroxide, it acts as a catalyst to the decomposition process. This creates oxygen at a much faster rate which can be seen as bubbling inside the graduated cylinder. Placing the partially glowing stick into the concentrated oxygen completes the fire triangle and reignites the flame.