After the spectacular view of the solar eclipse last month, the sky gazers will get another chance to witness celestial wonder this month. A Penumbral Lunar Eclipse will occur on July 05, 2020.

However, on July 5, the lunar eclipse will be visible only from some parts of the world. People from South/West Europe, Africa, North America, South America, Pacific, Atlantic, Indian Ocean, and Antarctica can view Penumbral Lunar Eclipse on July 4-5. Since it is a penumbral eclipse, it will be hard to see, as the Moon will only be a bit fainter.

What is Lunar Eclispe? 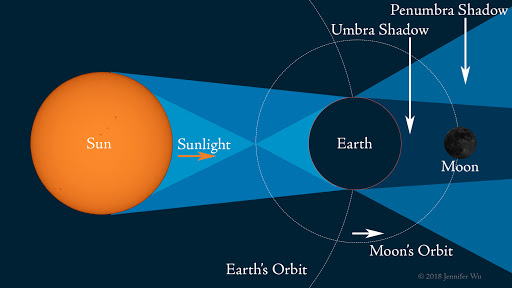 During a total lunar eclipse, Earth completely blocks direct sunlight from reaching the Moon. The only light reflected from the lunar surface has been refracted by Earth’s atmosphere. This light appears reddish for the same reason that a sunset or sunrise does: the Rayleigh scattering of blue light. Due to this reddish color, a totally eclipsed Moon is sometimes called a blood moon.

During the penumbral lunar eclipse, the moon might appear darker than a usual Full Moon.

Timings of Lunar Eclipse on July 5

The Penumbral Lunar Eclipse on July 05 will not be visible in India; however, people in other parts of the globe can witness this astronomical event at these timings.

The next penumbral lunar eclipse will occur on November 29, 2020. It will not be visible in New Delhi, as it is below the horizon during the eclipse. The total duration of the eclipse is 2 hours, 45 minutes. Because it is a penumbral lunar eclipse, it will be hard to spot and skywatchers won’t be able to differentiate it from a full moon. The only distinguishing factor will be that the moon will appear darker.