On June 21, 2020, the world enjoyed a wonderful astronomical event. This is the day that astronomers eagerly waited for. The solar eclipse itself is a very beautiful celestial event to watch. There are different stories in different countries regarding solar eclipse. At the same time, astronomers consider it to be just a coincidence in which the Moon while orbiting around the earth happens to come between the Sun and the Earth, due to which the Moon covers the Sun. This is called eclipse. During Annular Solar Eclipse, the distance of the moon is farther from the sun than usual due to which it is unable to cover the sun completely. Due to this phenomenon, sun appears as a bright golden ring as called “the ring of fire”.

The solar eclipse of June 21 falls in the category of annular solar eclipse. The line of maximum eclipse originated from Pacific Ocean, and passed over from Taiwan, China, Uttrakhand, Uttar Pradesh, Yamunanagar, Kurukshetra, Kaithal, Fatehabad and Sirsa in Haryana, some areas of Rajasthan, Pakistan, Oman, Saudi Arabia, Yemen, Ethiopia, South Sudan,  and finally in Africa. 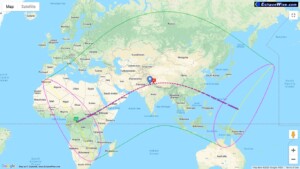 During the live telecast, following Professors were invited to discuss the phenomenon of eclipses:

The following students also participated in the discussion

Deputy Commissioner of Kurukshetra, Sh. Dhirendra Khadgata, IAS also joined as guest during the live stream and watched the solar eclipse. Shri Dharam Vir paid a vote of thanks to him for supporting the event.

The live webcast started at 10:20 AM with Mr. Mahi Paul Sharma introducing the event and Er. Anuj Goel while explaining the world map pointed out that how lucky we are to watch the eclipse from the line of maximum path. Prof. Keya Dharamvir presented a few slides with diagrams to explain the occurrence of a solar eclipse when moon’s shadow falls on the earth and how the three types of eclipse are distinguished.

Next, Prof. M.S. Sriram pointed out that Indian scholars have been observing and recording eclipses for the past at least 1500 years. He described with the help of slides how they predicted the future eclipses with great accuracy. Next, Prof. Kanhere said it was a matter of pride and progress that whereas 50 years ago during an eclipse, the neighborhood elders drove everybody inside and streets were deserted, today there is great enthusiasm to observe the eclipse. Even uneducated sections of the society show keen interest to understand the phenomena. Prof. Suman Beri applauded the audience for joining in such large numbers and remarked on the myth that during eclipse it is “forbidden” to go out; finding explanation in the fact that it is injurious to the eyes to look-up at the sun and during an eclipse it is tempting to do so. Prof. Kochhar also commented on the shastrik injunction of many do’s and don’t’s during eclipses saying these were formulated earlier than 1500 years ago i.e. earlier than the time when, as Prof. Sriram said, Indians understood the trajectory of heavenly bodies and eclipses. He also said this is an occasion to sift science from pseudoscience.

Prof. Sandip Sahijpal sent the video recorded by him at the Panjab University, Chandigarh where the eclipse was partial.

Shomick Adhicary, a student at IISER Pune explained how during an eclipse in 1896, Eddington first verified Einstein’s general theory of relativity, showing the bonding of light rays around the sun.

Tanmay Gupta, a final year school student at Kaula Lumpur showed some of the eclipse photographs taken by him a few years ago at Singapore during a total eclipse. He discussed some of the techniques used. Prof. Harvinder Kaur Jassal said that eclipse watching is not only informative, but also addictive.

The panel of experts also fielded a number of questions from the viewers.

During the webcast and later we received many remarks on Email, WhatsApp and Social Media. Many of them said that our program was better (more informative and comprehensive) than most of the television channels. Some complained about the quality of audio in the live stream.

More than 3000 people from all over the country joined and also interacted with the experts. 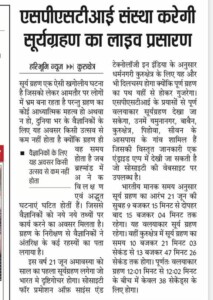 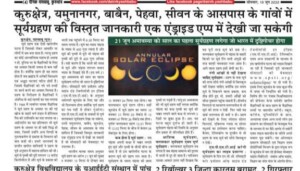